2018 was Tuesday Market’s tenth season, and the third as a program of Grow Food Northampton. Rain or shine, the farmers’ market set up from 1:30-6:30pm every Tuesday from April 24 to November 13 in the plaza between Thornes Marketplace and the city parking garage in Downtown Northampton.

Once again voted “Best in the Valley” by Valley Advocate readers, Tuesday Market continued to be a beloved weekly event in Northampton. Most weeks featured some type of music or entertainment and during the height of the season the plaza was filled with over 100 visitors at any time. 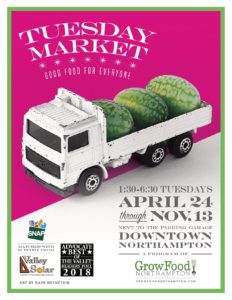 Carrying on the tradition of highlighting unique art, the 2018 Tuesday Market poster featured a photograph byFlorence artist and market supporter, Dave Rothstein. The photo was part of a series titled Small Portions, which showcased local food paired with miniature figures. The poster image shows Old Friends Farm cucamelons on the back of a toy pick-up truck.

For the second year, Tuesday Market hosted a series of cooking demonstrations by local chefs. The Summer Chef Series featured chefs curated by the Lisa Ekus Group, a literary agency in Hatfield, MA. Each week for four weeks a new chef prepared a recipe using ingredients from around the market, teaching their techniques to market-goers and then offering samples. The 2018 series was improved this year by moving it to the center of the market and use of a better sound system, provided by Mill River Music and Guitars in return for acknowledgement in our newsletter and on social media.

The MA state-run Healthy Incentives Program (HIP) was suspended due to funding issues at the start of our season but returned at the end of May. At the height of the season, Tuesday Market had 7 vendors accepting HIP, all of the fruit/vegetable vendors. Customers who utilize SNAP benefits found Tuesday Market to be one of the best places in the area to use their HIP dollars. “HIP made it possible to feed my family healthy and nutritious food rather than just cheap processed food. I also used many of the HIP and SNAP benefits to purchase starter plants and was able to have a full garden to feed my family all summer and preserve many veggies and homemade foods for the colder seasons.”- Tuesday Market customer.

Tuesday Market continued to prioritize SNAP benefits at the market in 2018. Our SNAP Match program was strengthened by the addition of a business sponsor. Florence-based business, Valley Solar, signed on at the beginning of the season as Lead Sponsor, providing funds to be used to match up to $10 each week to SNAP customers. Of those taking advantage of the SNAP Match, 53% reside in Northampton, 80% live in Hampshire County and 13% from Hamden County. We are proud of the amount of access and incentives that we are able to provide to SNAP households. Our survey has shown that 90% of these people would come less or not at all if these programs were not in place. Participants cited increased health, quality family time, better quality food and the ability to shop at Tuesday Market as the benefits of the incentives available at the market. “SNAP Matching has had a positive impact on my entire family. From shopping together to cooking and eating together. That family time had been lost, we have it again.”– SNAP Match participant.

Tuesday Market owes its success in part to support from the City of Northampton and our neighbors at Thornes Marketplace and the city parking garage. From storage to parking to electricity hook-ups and more, we are lucky to have such a helpful support network.

We are grateful for the people who make Tuesday Market’s magic every week: our loyal customers, the musicians and performers who share their talents with us, our helpful team at Grow Food Northampton and most of all, our vendors. We are so lucky to have a set of vendors who set the standard for excellence, from their beautiful produce and products, to their attractive and inspiring displays to their friendly dispositions, they’re what makes Tuesday Market what it is, the best! We can’t wait to see everyone again in April! 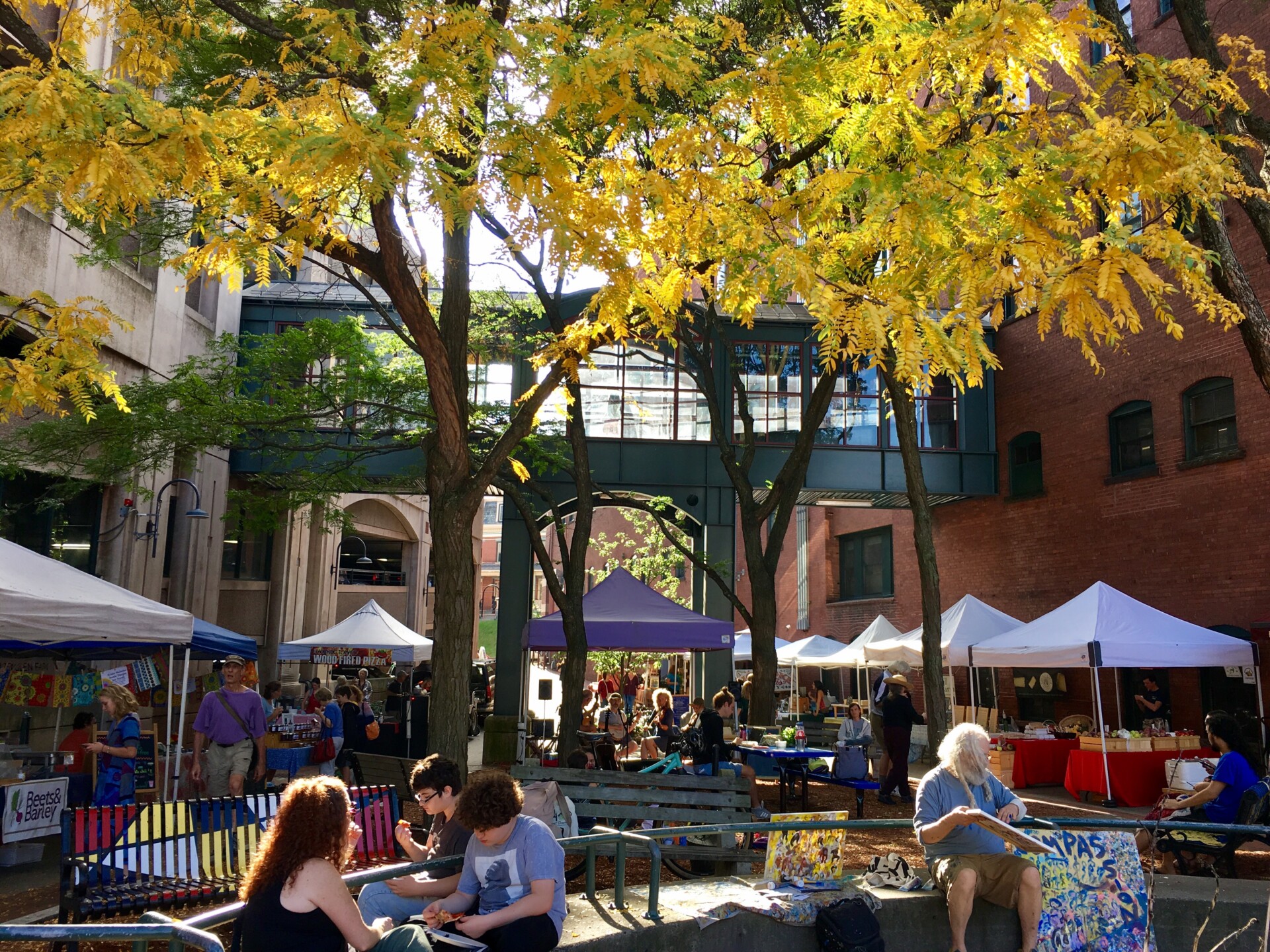 Donate Today to DOUBLE Your Impact!

A group of GFN supporters has offered us a challenge. They will match every donation…