The Community Food Distribution Project (CFDP) has been working to provide food and fresh produce to Northampton residents since March 2020. Each week, Grow Food Northampton staff and volunteers pack and deliver food to hundreds of families in Northampton communities. The team of volunteers is vital to the success of the program and keeping the deliveries running smooth. We’ve been lucky to have dozens of people helping to make the CFDP happen. Here we shine the spotlight on four of our outstanding volunteers, Janet, Whitney, Ari and Diana. Enjoy reading their perspective on their time with the CFDP.

If you’re interested in joining the team, learn more about volunteering here. 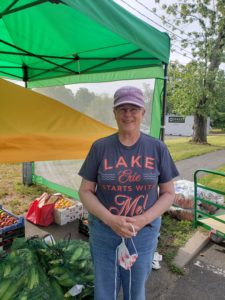 My name is Janet Varnon.  I live in Greenfield, Massachusetts.  My husband and I moved here from Ohio to be near two of our grandchildren and their parents. We go to the Haydenville Congregational Church, and I work with the Hampshire Association of the United Church of Christ as a volunteer on the executive committee. I am also a deacon at my church.  I knit, love to read, love spending time with my grandchildren here in Massachusetts, and the ones in Texas and California also.

I volunteered to help with the food distribution because someone from my church asked if I could.  It seemed that in the time of covid, when we all felt so helpless, being able to do something that helped someone else was a good thing to do.  My experience has been great.  I love feeling like I am doing something useful.  I love meeting other volunteers and people who are receiving food.  Everyone is so positive.  The volunteers are eager to do whatever they are asked to do, and the people receiving the food are so grateful for whatever it is they are getting.  It is so powerful to spend a day with no whining or complaining, and few negative opinions.  It has just been a positive experience all around.

One of the most memorable things from my volunteer time happened when I was working at the Lumberyard location. A man walked up to us and asked what we were doing.  We explained who we represented, and that we were giving away food to those who needed it.  He asked if he could help, and we told him how to volunteer. He walked away, and when he came back a few minutes later, he handed the intake person a hundred-dollar bill and said he hoped it would be helpful! It just blew us all away, and made us feel so good that there were people who wanted to support what we were doing. 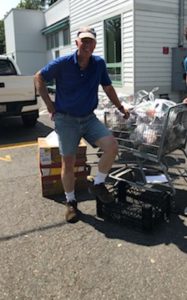 I’m Whitney Russell. I’m 77, and have been a teacher and coach most of my life. I was born in Carolina, grew up in New Jersey and Pennsylvania, and taught most of my career in Hamden, CT—32 years at Hamden Hall Country Day School. In the early 2000s, I moved to Greenfield full-time to contra dance (French square dancing) every weekend at the Guiding Star Grange. In late 2006, I also returned to work at Northampton High School as a teacher, coach, and activities advisor.

I advised the NHS Key Club for a number of years, and we often engaged in volunteer work at the Survival Center. When this spring’s events created opportunities, I joined in to pack vehicles and make Tuesday and Thursday deliveries from the Survival Center’s temporary location at Jackson Street, starting in late April. We all made many connections with families and seniors around Northampton and Florence. I quickly grew to admire and support the two key Grow Northampton Food Distribution leaders, Michael and Francie.

These highly motivated leaders made my volunteer time very organized, highly productive, and most enjoyable. Kids, families, and the elderly greeted us with warmth and respect as we delivered large shopping bags and cardboard boxes full of fresh fruits, veggies, dry food, and canned goods. Residents of Hampshire Heights joined us in conversation, and in making scores and scores of individual deliveries to many apartments.

This has been such a rewarding experience, and again, I really want to thank the Survival Center, Grow Food Northampton, and the leaders, Michael and Francie. Great job! Great SPIRIT! And a great sense of community. 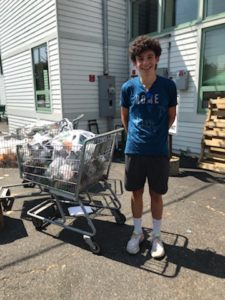 My name is Ari Benjamin. I live in Haydenville and will be a senior at Northampton High School this year. I run for the school’s cross country & track teams, and train for that every day, essentially. I also really enjoy playing music on the guitar and singing, although I do play the drums and know some piano, too.

I started volunteering with the Community Food Distribution Project through my dad, Tom Benjamin. He played a large role in designing the community gardens in Florence, and was the one who originally found out about volunteering opportunities with the CFDP. (We’re also neighbors of Pat James, who coordinated the CFDP volunteers for months.) Tom volunteered for a couple of weeks, but then asked me if I would want to help out, especially with the growing need for more people each week. I decided to try it out one day and I really enjoyed it, so I decided to keep coming back. I like volunteering because I love helping other people, and I love meeting new people. Everybody who participates in this volunteer effort is so nice, and everyone we deliver to is so nice and thankful for the service. You know you’re doing something good for other people, and that’s a great feeling. 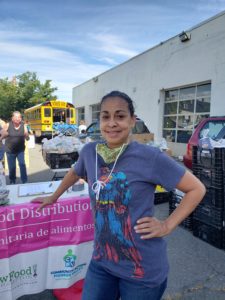 My name is Diana Ortiz. I live in Northampton. I work part-time as a Patient Care Assistant. When I can, I take care of my granddaughters, ages 5 and 4, who live in Easthampton. I have an 18-year-old son, and my daughter is almost 32. I moved here from New York about 20 years ago, and lived in Holyoke, then Springfield, and then Northampton.

I decided to volunteer with the CFDP because I used to go to the Survival Center once in a while, and I got to know some of the people who volunteer there. The Survival Center is a really nice place, and I just wanted to give back a bit and help out however I could. I used to volunteer at a program that helped teen moms get their diplomas. I worked in a nursing home for 7 years; I’ve worked at the Food Bank of Western Massachusetts; I’ve worked in a residential program. Helping is just in my nature.

My favorite part of volunteering is the people I work with. I like them, they’re really nice. It’s also really nice to be able to help people out in different ways. The other day I was talking with this gentlemen at distribution, and I was speaking Spanish, and he was like, Oh you speak Spanish! It was just good to be able to help him out if he had trouble understanding or had any problems.