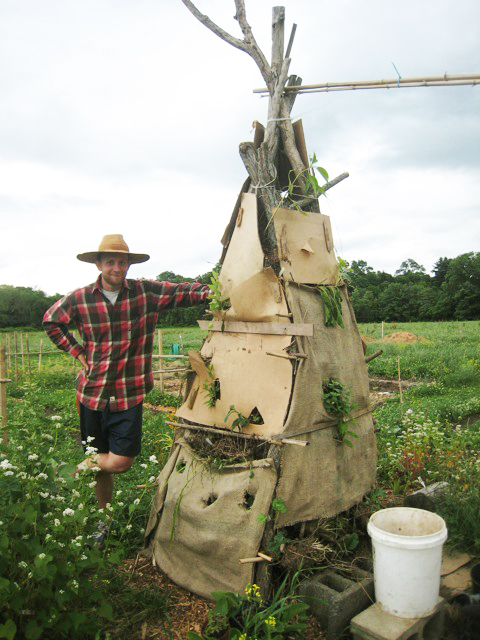 by Nancy Eve Cohen
Community Gardener, Writer for Vermont Public Radio
Gardens typically are planted on the ground. But gardener Eli Roberts is growing part of his inside a ten-foot-tall tower.
The 25-year-old permaculture student says one of his goals is to maximize growing space.Roberts first got serious about gardening four years ago when he built a raised bed in an alley in New Orleans with only four hours of sun a day.
Last year he studied sustainable agriculture at the Allegheny Mountain School in Virginia. Now, he’s working at four organizations in the valley focused on growing food. In his spare time, he tends his multi-level garden.
He’s got spaghetti squash, mint and tomatoes emerging from the tower.

To build it, Roberts filled a teepee of thick branches with compost, dirt, woodchips and leaves. The soil is held in place by burlap and cardboard. The structure is connected to a shorter, thick branch by bamboo poles. From afar it looks slightly askew, like a funky art project. But by the end of the summer, Roberts hopes the tower will be encased in green.

“I figure the runner beans will get to the top,” he said looking up.

Roberts, who is 6 feet tall, wants to see how high his garden can grow.

“This is the Russian giant variety of sunflower. So I put one here,” he gestured five feet up. “And I’ll put one at the top to see if it will grow past ten feet.”

Pointing to the north side of the tower, the shadiest, he said, “I’m going to try to put in my lettuce and spinach and see if they can make it there, over the hot part of the summer.”

Roberts is also maximizing his growing space on the ground by minimizing path space. Using what’s known as a ‘keyhole design’, he plants beds at the end of each path.

“The idea is to have a main artery,” he said. “And then have little  pathways coming off of this central space.”

Unlike many gardeners, Roberts doesn’t have rows of a single crop. In fact, his jumble of plants has a messy look. For instance, buckwheat is planted very close to tomatoes. The tiny, white buckwheat flowers attract parasitic wasps. The wasps have small mouths that can drink the nectar. Then, the wasps lay their eggs on caterpillars.

“Which is so cool!”  Roberts exclaims. “The wasp larvae eat the caterpillar from the inside, so that it doesn’t eat your tomatoes.”

But the buckwheat-tomato pairing didn’t work as planned. The buckwheat grew more quickly than the tomatoes, shading them.

For Roberts it’s not a failure, but a learning experience.

“This is a useful experiment,” he said.

However, his cilantro is thriving because of the buckwheat’s shade.

Roberts says he’s found a community garden is “a space for experimentation and sharing of ideas.”

He says gardening with other people is more fun than doing it by him self.

Valley Grows Day, a Pioneer Valley-wide day of giving, was successful on many fronts! Valley…

The Mass Farm to School Harvest of the Month for March was Dairy. Students in…