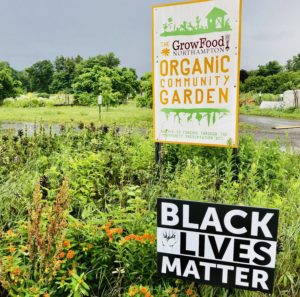 As a staff and individually, all of us at Grow Food Northampton have been working to educate ourselves about racial inequity and the effects of white supremacy, our relationship to the land, and how our programs can best reflect our values. We’ve all found a variety of resources to be helpful. Find personal recommendations and a lengthy list of links below:

Recommendations from Our Staff

“1619” is a New York Times audio series, hosted by Nikole Hannah-Jones, that examines the long shadow of American slavery.

I found this podcast to be a great history lesson and I was particularly interested in the final 2 episodes looking at the history of black land ownership in America in the context of racial oppression. -Niki

A collection of essays from the 2007 Black Environmental Thought conference.

Through these short essays, I have been made aware of the vast history not captured by the textbooks I used throughout college. Major impacts have been made on the way we eat by African Americans, many who [have not even earned recognition, credit, or the economic benefits they deserved]. I am grateful to learn where a majority of sustainable and holistic approaches to farming began, with those so deeply rooted in the land. It is our responsibility, within this work, to support and secure the land and space for African American farmers in the food system. -Megan

This ‘Equity’ Picture is Actually White Supremacy at Work

This is already an “oldie” but it’s definitely a “goodie” – a quick yet crucial read to understand how white supremacy figures into even well-intentioned attempts to address equity and the legacy of racism. – Alisa

This is not a heady read, instead, it provides hope through real examples of how grassroots bottom up change is happening. It also has a great index of resources and shares actionable ideas of how we might make changes in different areas of land and food systems. –Melissa

Biopiracy The Plunder of Nature and Knowledge OR Anything by Vandana Shiva!

This book discusses intellectual and property rights and how capitalism has co opted agricultural knowledge, land, and resources. She has an amazing history of fighting for food sovereignty. -Melissa

John Oliver on policing and White supremacy– Warning; explicit language and images of police violence in this video clip!

In light of nationwide protests against police brutality and systemic racism, John Oliver focused a recent episode of Last Week Tonight on the police in the U.S. This episode gives a brief and shocking look at some examples of systemic racism in the police force. I often appreciate John Oliver for his comedic and thoroughly researched episodes, and I was grateful to him for not sugarcoating the pain and suffering of black people and POC at the hands of the police in this country in this episode. Highly recommend, if you are up for all of his profanity! -Ellena

Alternatives for Community and Environment (ACE) is a Black-led community-based non-profit organization in Boston that has been fighting against environmental racism for over 25 years. ACE has a long history and proven track record of achieving significant wins on environmental justice and civil rights including: passing the Commonwealth’s Executive Order on Environmental Justice, passing the City of Boston Ordinance to Protect Air Quality by reducing fuel emissions, and blocking numerous dirty fuel projects from being sited in EJ communities.

Media Education Foundation is making its films about the history of systemic racism, white privilege, and racial scapegoating in the U.S. available for free streaming until the end of July.

14 Ways to be in action against anti-Black Racism

Performative allyship is deadly (Here’s what to do instead)

Resources for Teaching Kids about Racism

There are all kinds of teaching tools and resources out there for talking to kids about race, anti-Blackness, and racism. But these are some of my favorites, particularly Embrace Race, an organization started by my friends in Amherst, Andrew Grant-Thomas and Melissa Giraud, and The Conscious Kid. — Alisa

How to Talk to Kids About Race: Books and Resources That Can Help

5 Tips for Teaching Kids about Racism

Mobile Directory Of 600 Books for Kids That Prioritize Diversity

The Conscious Kid How to Talk to Kids about Race

Children’s books to support conversations on race, racism, and resistance